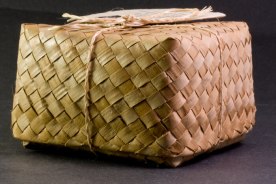 With its long stem-less clumps of up to 1.5m leaf blades; its extensive rhizome root system; and its feathery white flowers’ over productive seeding capability (3000 seeds per plant!), and its allelopathic tendencies –(allelo what?  I’ll explain in a bit)—Cogon sucks nutrients and insinuates itself in crops and fields.

Imperata cylindrica a.k.a Cogon has the right to the “killer weed” title.

Allelopathy is when Cogon or other plants release biochemicals that can influence or suppress the growth of its surrounding plants.  Its aim is really for its own survival by acquiring more of the sun, soil and water.  An example would be the Garlic Mustard plant native to Europe, which emits compounds that stifles mycorrhizal fungi which in turn is needed by many native trees for their growth.  Most plants with this ability end up in the invasive weed hit list.

Detecting a few tufts of this grass could lead to panic since it has neither predator nor pathogen that can naturally control it.  The most obnoxious thing about Cogon is that tragedies bring out its best.  In fact, the seeds are dependent on fire, cutting and other physical disturbances for the release of its seed.  Add to the mix its fire-resistant rhizomes which can thrive in acidic soils of more than 5 pH—you get a highly aggressive, and damaging weed.

But every story deserves a redeeming twist.  And every living thing has its own purpose…it’s just waiting to be uncovered.

In 2014, Tajul Shuhaizam Said, Harozili Ramli & Mohd Fauzi Sedon from Sultan Idris Education University in Malaysia created EGG or Eco Green Glaze from Imperata Cylindrica ash.  This sustainable and eco-friendly ceramic glaze is composed of 70-80% of the Cogon weed; lowering the cost of ceramic production.  Cogon was found to have a high silica content which is generally what glazes are made of.  The addition of copper cobalt, iron oxide or cobalt carbonates make for pretty colors.

Its allelopathy and allelochemicals along with other plants have recently been seen as having potential as natural herbicides or environmentally supporting crop management systems.  That’s a way of turning negative effects into positive.  Let’s call it reverse plant psychology!

Further exploration into the common weed’s properties would be a great way to uncover many of Cogon’s useful applications that go beyond roof thatch and paper crafts.